Further on the Twinkie Defense 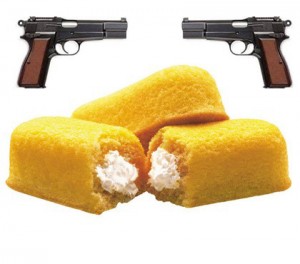 I was greatly saddened by learning for the first time the physical punishment journalist and satirist Paul Krassner suffered after the Dan White verdict.  Clearly Twinkies have played a far more dramatic and enduring impact on his life than it ever did on the Dan White jury.

There was in fact never a “Twinkie defense” — which remains one of California’s more persistent urban myths.  There was about a week of psychiatric testimony discussing all of the factors that contributed to Dan White going off the rails in his deliberate, homicidal way, and in that week’s testimony perhaps five minutes was devoted to describing White’s periodic depressions which were invariably accompanied by abandonment of a healthy diet in favor of junk foods.  No one (and certainly not me) ever testified that Twinkies turn you into a killer or that it did so in White’s case — doubtless if someone had offered that testimony, what jury would believe it (let alone twelve)?

Interestingly, the last decade has seen ever more evidence that you are indeed what you eat and that so called junk foods are infused with a host of chemicals, few of which are any good for you.  There are studies which show a definite correlation between a diet weighted toward junk foods and antisocial conduct, irrationality, irritability, etc. — at least in those who may be genetically susceptible.  One study I found particularly germane was done in a prison wherein half of the prisoners lost their commissary privileges for a month while the other half continued to spend their chits on Coca Cola, Twinkies, and other such garbage.  The result:  a 70% drop in “incidents” and “disciplinary actions” in the group that was denied access to the commissary sugar/chemical laden garbage food relative to the control food.

The bottom line to all of this is that White’s pre-homicide diet was hardly therapeutic, but that a week’s psychiatric testimony could be reduced to a simplistic “Twinkie defense” reflects the challenge our soundbite media faces in trying to explicate the complexities of human behavior and the operations of the criminal mind.  a neat label like “Twinkie defense” or even a few sentences just don’t cut it.